Defining Exit Velocity, the Age Chart, and Its Effect on Distance

The exit speed is a critical component to players. The hitter’s primary goal is to attain a high exit velocity, as a ball struck hard will give you a better opportunity to reach a base. Many players hone their skills by learning how to increase the exit velocity off a tee.

However, the average exit velocity off tee varies by age, as hitters of different ages have different body strength and coordination skills.

What is Exit Velocity?

​Exit velocity is considered by many to be the only truly objective measure of how hard a ball was hit. For  those wondering how to measure exit velocity, the answer is that it’s measured the same way you measure the speed of a moving car, with a radar gun.

​As we mentioned, there are a number of variables involved in determining exit velocity by age. In addition, measuring exit velocity by radar is something of an inexact science, although you can still obtain readings that are accurate enough to be useful.

​When you watch a game on TV the exit velocity results from a pitched ball being struck. That pitched ball is already loaded with energy from the pitcher which will add exit velocity to the ball when it’s struck.  Perhaps as much as 10-15 mph.

​A more reliable way to measure exit velocity and to determine if you’re making progress, is to use the me type of bat and ball every time and measure off a tee. You should also use the same type of radar gun every time since different guns are known to produce different results.

Why Exit Velocity is Important

​Scientific studies have demonstrated that every additional mile per hour of exit velocity produces an  additional 4-6 feet of distance, all other things being equal. The implication, of course, is that if you can produce a few extra miles per hour off the bat your former warning track shots can be turned into home runs, your singles into doubles and so on.

​One 18 year old may produce a 100 mph exit velocity while another can only manage 80 or 85 mph. In  general though exit velocity by age tends to average as follows…

​One of the most important factors in determining exit velocity is bat speed. Proper Bat speed measurement should track the speed the tip of the bat directly prior to contact with the ball. The more bat speed a hitter can generate, the greater the exit velocity.

How to Increase Exit Velocity

​Even if you improve your mechanics and find the ideal bat, the speed with which you swing that bat will  still be the biggest single factor in determining exit velocity and, by extension, distance.

How Can I Check My Bat Speed?

​The most reliable way to check your bat speed is with the Bat Speed Recon bat sensor swing analyzer.  Bat Speed Recon uses pulses of infrared LED light bounced off reflectors on your bat to determine how  fast your bat is moving at the point of contact.

​If you are interested in increasing your bat speed exercise is the place to start. Exercises that increase upper body strength and forearm strength such as free weights, resistance bands, medicine ball training  and more can help you generate more bat speed.

​The average exit velo. by age in baseball varies widely from young players to established MLB stars, but  one thing is certain: the faster your bat speed, the faster the exit velocity, and the further the ball is going to travel. The device to measure baseball exit velocity is the radar gun, while the best way to keep  track of your bat speed is the Bat Speed Recon swing analyzer. 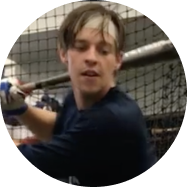 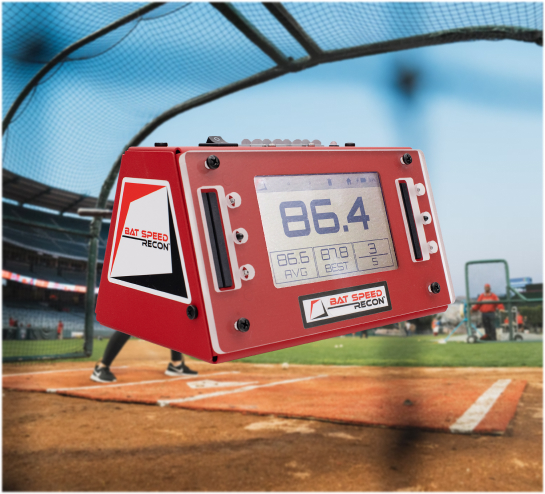